Our current research deals with the valorisation in organic synthesis of montmorillonite K10 supported catalysts and more recently, of innovative ecocatalysts obtained from plants cultivated on contaminated soils. The contaminated soils used for the preparation of our ecocatalysts come from the former mining basin of northern France and are particularly rich in cadmium (Cd), lead (Pb) and zinc (Zn). After immobilisation of the carcinogenic metals (Cd, Pb) by chemical amendment, we were able to increase zinc non-carcinogenic metal uptake by plants and thus elaborate new heterogeneous catalysts (called ecocatalysts (Eco-Zn)). In this work, we will present our efforts to obtain new molecules with promising biological activity based primarily on aminolyses and aza-Michael reactions, not investigated so far in the context of ecocatalysis. 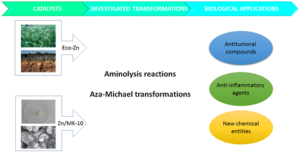